Proud to be part of a squad of 72 GB fencers Silvia Brown returned to the UK from Livorno Italy with Silver Medals .

Silvia belongs to Huntingdonshire Fencing Club as well as Cambridge and Bedford clubs.

She started her day by winning all but one fight in a poule of 7 giving her a ranking of 3rd. This earned her a bye into the last 16.

Fencing in the semi- final she came back from a nail biting 7/9 score against her to beat Iris Gardini of Italy 10-9 t the dismay of the vociferous Italian home crowd.

In the gala final Silvia came up against the formidable French champion Marie-Chantal Demaille. Silvia could not regain her previous form and the Frenchwoman won Gold with Silvia taking the Silver Medal.

Bedford Fencing Club and Silvia’s Coach Jonathan Katz travelled to Italy early in the week to help her prepare for the Championships. 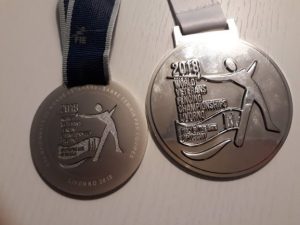 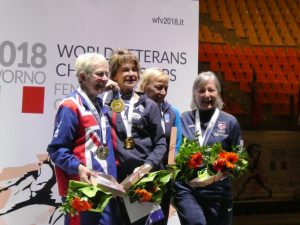 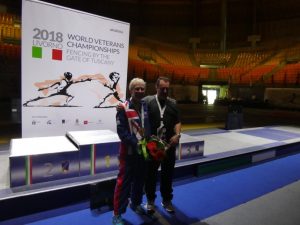 Silvia pictured with the other winners and below her coach Jonathan Katz.

There was more Silver to come in the Team competition with the two Bedford fencers fencing in different age categories for GB.  Each team has two women from each age category 50+, 60+ and 70+ fencing in a 6 fight match up to a cumulative score of 30 hits.

In a poule of 4 teams GB first met Japan. GB won handsomely 30/11.  The next opponents were Italy and the GB team had a closer battle winning 30/18. Australia scored just 15 against them.

This earned the British team first seeding out of 7 teams and a bye straight to the semi-final round against their old opponents Germany.  Leading throughout the match the final score was 30/25. 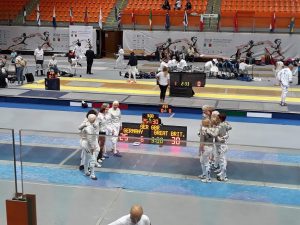 The gala final was against host nation Italy who had just narrowly beaten France 30/27.

This tense exciting match was watched by a large number of loudly cheering Italians and Brits, who were leading for most of the match.  But Italy moved into the lead in the last two fights to be crowned World Champions 30/26.

These helped GB to come fifth in the medals table with a total of 9 medals, 2 Gold, 4 Silver and 3 Bronze.

There are no upcoming events.